THIS GENALOGICAL RESEARCH BASED ON THE SCHEUTEN MANUSCRIPTS (16TH CENTURY) AND THEIR FAMILY TRADITION.

The official statement of the family association reads: An origin of the originally German or Dutch family Op den Graeff from the Von Graben house cannot be verified because it is unsourced. This theory is only maintained by their descendants.

During the Thirty Years War, many genealogical records housed in churches were destroyed, so a lot of their genealogy isn't available.

The Op den Graeffs where Mennonits and an immigrate to Krefeld. In 1683 some members of the family migrated to the United States. Abraham op den Graeff, one of the three sons of Isaac Hermansz op den Graeff was invited by his cousin William Penn in 1681 to leave Krefeld for Philadelphia. They are among the thirteen families ("Original 13") often referred to as the Germantown, Philadelphia, Pennsylvania founders, who arrived on the ship Concord on October 6, 1683. Surnames were changed to Updengraff at some point either upon their arrival to Philadelphia or shortly thereafter. Another american branch of the Op den Graeff family, Updegrove, descendat from one John William op den Graeff (1732-1800/1804). They arrived to Germantwn around 1754. In the States the family split up in the branches Updegraff, Updegrove, Updegraph, Upthegrove etc. Also the family Groff, Grove, an alleged branch of Hans Graff (1661-1746) lives in the States. There are also reported members of the Updegrove-family living in New-Zealand.

There are no sources if the Graeff, Gräff family of Bad Kreuznach belong to the Op den Graeffs. That family show a similar coat of arms with a swan. see more under Coat of arms

* Abraham Isacks op den Graeff (1649-1731), one of the Original 13, the first german settlers in America, signer of the first organized religious protest against slavery in colonial America

* Abraham Isacks op den Graeff (1649-1731), in 1683 one of the Original 13 who became the first german settlers in Northamerica (Germantwon, Pennsylvania), cousin to William Penn, signer of the first organized religious protest against slavery in colonial America

From an Updegraff family book

Excurse: Graff in Switzerland, Grove in the United States

The offspring of the originally swiss family Graff said that they belong to the german Op den Graeffs. This claim is totally unproven. They say that they descendant from Isaac op den Graeff van de Aldekerk (born around 1525), son of Abraham op den Graeff (1485-1561), claimed son of Wolfgang von Graben (1465.1521) and claimed ancrestor of the german Op den Graeff, and  brother of Herman op den Graeff van de Aldekerk (born 1520). Isaacs (claimed) descendants lived in Switzerland until 1695, when Hans Graf(f) and his brothers from Bäretswil arrives to Pennsylvania, United States.

Hans Graf(f) (1661-1746) was born in Bäretswil, Switzerland, and during the persecution of the Mennonites in his native country, he with others fled to Alsace. Later he came to America and became in the new world a man of wealth and prominence. Hans Graf arrived in Pennsylvania about 1695 and emigrated to Germantown where he remained several years. Hans with other Mennonite families moved west and took up their abode on the northern side of Pequea Creek. It was not until 1717 however that pioneers found their way in to Earl Township, Lancaster County. This honor belongs to Hans Graf, for while in pursuit of his strayed horses, he found his way into what is familiarly known as Groff's Thal, within the limits of west Earl Township. Pleased with the country, he had his wife, children and chattels conveyed thither and located on the stream now called Graf's Run, where he soon took up land. He was the earliest settler in these townships, so also was he the wealthiest citizen at the time of his death in 1746.

This Hans Graf was a man of more than ordinary force of character; he was the principal person in the new settlement that sprung up around him, even to the time of his death his name frequently occurs in the Colonial Records; he was one of the persons named to lay out the King's High Road from Lancaster to Philadelphia in 1733. Along with many others he was naturalized on Oct. 14, 1720, in the third year of the reign of George the second. He had already built a mill prior to 1729 and when in that year the township was organized the citizens honored both themselves and him in giving his name 'Graf', in its English equivalent, Earl, to the new district. The foundation stones of the cabin he built in 1718 are yet to be seen in the barn yard of his lineal descendant, Levi W. Groff, who owns the residence on the old homestead. The survey of his land was made on October 4, 1718 and calls for 1150 acres; on the 28th of February 1724, he bought 250 acres from Martin Kendrick and Hans Herr, who had purchased 5,000 acres from Penn on 22nd of November, 1717. Under these two warrants there were surveyed to him, in a single tract on a branch of the Conestoga, 1419 acres on October 10, 1727, for which a deed was made to him by Thomas Penn on Nov. 18,1737. This deed after citing the circumstances of the survey, goes on and makes transfer "of all mines, minerals, quarries, meadows, marshes, etc. The price paid for this goodly tract of land was L 141, 180 and One English shilling quit rent for every one hundred acres, to be paid annually on every first of March in the city of Lancaster, Penn. Ascertaining in some way that his tract did not contain the full number of acres called for by his deed he asked for a re-survey, which was granted October 16, 1742, when 91 additional acres were given him as shortage. West Earl also boasts of having had within her bounds one of the first, perhaps the first Mill in Lancaster County, Penn. This stood on the south side of the Conestoga, right at the point where the Concalico unites with the stream. It was made a corner of Warwick Township when that district was organized in 1729, and only through that fact has its existence been preserved from utter oblivion. How long it was there prior to that date is unknown. An ancient deed covering this spot was also found and mentions it as a mill site and speaks of the mill race, but the mill had even then disappeared.

Hans Graf the first settler in these townships was the builder and owner of this early mill. Other evidence of Hans Graf: Rupp's Collection of Thirty Thousand Immigrants to Pennsylvania page 433 - "Hans Graf came to Germantown in 1696. Also Hans Graf was Naturalized October 14, 1729. His brother Martin Graf, was first constable. 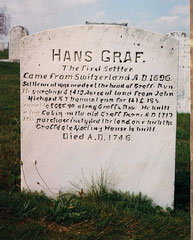