I) (De) Graeff in the Netherlands

Originally descendant from alleged Wolfgang von Graben) 1465-1521) who arrived to Holland in 1483. His son Pieter Graeff (born 1484) was the ancrestor of the (De) Graeff family in the Netherlands.

During the Dutch Golden Age (around 1578-1672), the De Graeff family had a leading role in Amsterdam and Holland administration. They were very critical of the influence of the House of Orange-Nassau. The De Graeff belonged to the republican political movement, also referred to as the state oriented, as opposed to the Royalists. Together with their relatives, the Republican political leaders of the Bicker family and Grand Pensionary Johan de Witt, the republican minded brothers Cornelis and Andries de Graeff for example strived to the abolition of stadtholdership. In Rampjaar 1672, when the Organists took power again, the De Graeffs lost their positions as one of the key States party families.

A big accomplishment of the family De Graeff was in the sponsorship of art and architecture. They were responsible for the majority of Amsterdam art during their reign in the Dutch Golden Age. Andries and Cornelis continued in the family tradition of patronizing artists. They would chiefly comission works from Rembrandt, Jacob van Ruisdael, Pickenoy, Quellinus, Caspar Netscher and Gerard de Lairesse and Jacob Jordaens. They were well known to have been patrons of the poets, example to Joost van den Vondel.

Today the descendants and relatives of the (De) Graeff family lives in the Netherlands, Germany (?), Austria and South Africa.

* Dirck Jansz Graeff (1532/1589), mayor of Amsterdam, richest merchant of the city, close friend to prince Willem I. of Orange, the Silent

* Cornelis de Graeff (1599/1664), regent and mayor of Amsterdam, dutch statesman, president of the Dutch East Indies Company, lord of the semisouverain fief Zuid-Polsbroek, advisor to the princess of England and Johan de Witt, his nephew

* Dirk de Graeff van Polsbroek (1833/1916), diplomat, generalconsul and dutch minister in Japan, he played a major part in the many negotiations between Japan and various western countires. He was advisor to Emperor Meiji and laid the foundation stone for a modern western diplomacy in Japan

II) Graeff in Prussia, Saxony and back in Austria

The austrian family descendant from Carolu Gräf(f) (born around 1760 in Saxony, Germany), member of an early dutch-german bastard-branch of the Graeff family located in ancient Prussia and Saxony possible descendant from Adriaan Jacobsz Graeff, hisself kind of a bastard-offspring of Jacob Jansz Graeff, died around 1580 in Amsterdam, a younger brother of Jan Dircksz Graeff, who became mayor of Amsterdam in 1578.

The family now mostly lives in Lower Austria and Vienna.

House Am Graben (Gars am Kamp, Austria) with the coats of arms of Meinhardiner, Von Graben and (De) Graeff 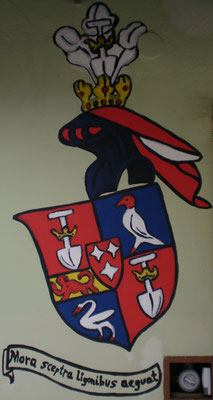 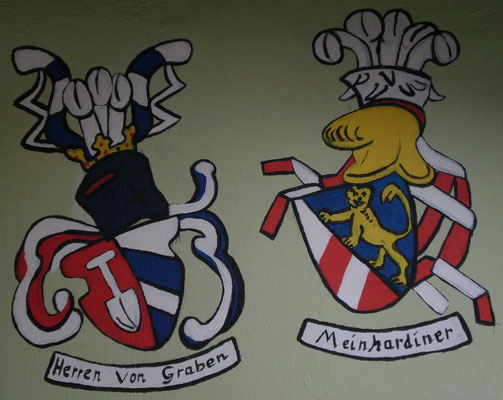 Provenience of the coat of arms Von Graben in the Gräff-family of Austria as registrated:

Born in a new way